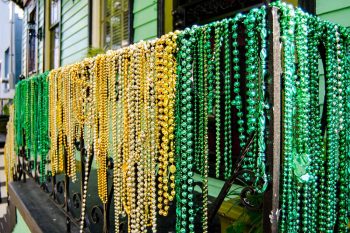 New Orleans is known for its French culture and Spanish influence, but this month the city takes time to celebrate its Irish heritage. The city celebrates via parades, block parties, lots of corned beef and cabbage, and maybe a pint or two of green beer.

Below are our picks for the Irish themed festivities. Make sure to check out St. Patrick's Day New Orleans for all of the parades, parade routes and parties. We hope you can make it down and enjoy the festivities with us.

The festivities start this year with Jim Monaghan's St. Patrick's Day parade, a French Quarter tradition. This year's parade includes appearances from brass bands like the Storyville Stompers and the New Wave Brass Band, as well as a number of dance groups including the Bearded Oysters and the Muffalottas. The parade begins at 6:30 p.m. at Molly's at the Market. The best place to catch the parade is on Decatur Street between Ursulines and Bienville or, if you're looking for something more festive, along Bourbon Street between those same cross streets.

Two rival Irish Channel bars, a block from each other, throw competing block parties. The winner is everyone that likes Irish music, food and beer. Tracy's is located at 2604 Magazine Street. Parasol's is at 3rd and Constance. Try Tracy's Corned Beef and Cabbage, but make sure to save room for Parasol's roast beef po-boy. Both bars are located near the end of the Irish Channel Parade making them a perfect parade headquarters.

The Irish take over the streets of the Irish Channel and the Garden District on Saturday, March 15. The parade begins at 1 p.m. The best places to catch the parade are along St. Charles Avenue between Jackson Avenue and Louisiana Avenue, or on Magazine Street. Be on the lookout for cabbage and other corned beef and cabbage ingredients handed out during the parade.

Of course there's also a parade on St. Patrick's Day itself. On March 17 the Downtown Irish Club march through Bywater, Marigny and the French Quarter, making several pit stops at drinking establishments on the way.

These events are just a few highlights of all of the Irish-celebrating events happening in New Orleans. There are a total of four strictly Irish themed parades in the area in March, not to mention the Italian-American St. Joseph's Parade on March 15, the Louisiana Irish-Italian Parade on the 23 rd and the St. Bernard Italian-Irish-Islenos Parade on April 6.

Come dressed in green and be ready to catch some cabbage! Erin go braugh!

Things to do in New Orleans April 2014